Gig no 4. Where? King Gong, Comedy Store, London.
Why? EXACTLY
What did I wear? What the f*ck did it matter. Blood ruins everything.
Who held my hand? No-one. I did this alone. No witnesses.

What Happened? Carnage. I died. I MORE than died. I experienced MEDIEVAL BRITAIN. ANCIENT ROME. And you are going to read ALL OF THIS to get the FULL HORROR of the DEATH. Let’s rewind to the beginning of the film. Where the lovely innocent heroine is driving in the sun towards some flimsy wood-built holiday destination in the woods, SHALL WE.

The Comedy Store is infamous. Legendary. Naturally I want to gig there. So I phone up. A lovely woman called Babs says she’ll email me the details and that it’ll be lovely to have a woman on the list. Babs. Remember that name. Lovely Babs. Babs is the man with one tooth in Wrong Turn, who sends the hero down the wrong path to the inbred mutant house. There’s a Michael McIntyre story when he was just starting out and phoned The Comedy Store to be given a slot in 18 months time. He put the phone down and they called back immediately, saying someone had dropped out that night and as his number was right in front of them… This was probably Babs. Bitch. McIntyre did better than me. His first gig there went really well. He died at his 2nd. And he didn’t do King Gong.

Evil Babs emails me THE NEXT DAY saying loads of people have dropped off the waiting list, would I like to go on tonight? “I AM Michael McIntyre!” I think immediately. “Isn’t Babs lovely?!” I get the email travelling back from the Imperial War Museum in Duxford with my husband. We’ve seen lots of tanks. Which is ironic as I should have f*cking taken one with me to Piccadilly.

I arrive at The Comedy Store, Piccadilly, ALONE, noting that the gathering audience seem very young and lively. I’m given a ticket and show it to the Big Hefty Bouncer who, seeing that I’m about to join the coat queue lifts me bodily off the floor and sets me down facing the sound booth. Just like Leatherface in Texas Chainsaw Massacre when he lifts Pam onto the meat hook. This is the bit, film fans, where we realise shit, they’re all working together.

I show my ticket to the Man in the Sound Booth. His face reads: “Look at the nice middle-class lady to whom nothing bad has ever happened. I can’t tell her. It’s just too funny.” And this is the bit where people scream at the screen: “Why is she going into the woods?! Alone?! At NIGHT??! Without a TANK??”

Sound Booth Man tells me I’m on in the 2nd half so to come back in the interval. I buy a beer, sit near the back, in a small crowd of nervous comics (we are massively recognisable) and wait. I have a sudden thought: Why have I told people I’m doing this? Why don’t I just run away and become a librarian.

The compere comes on. King Gong. The Gongmeister. He is the baddie from Wolf Creek. BEHOLD:

THEY ARE THE SAME PERSON. The side-burns, the leer, the unnerving blend of fool/serial killer. THEY ARE BOTH CALLED MICK. I am now experiencing META-FEAR: fear that is aware of your own complicity in your doom. I am that stupid woman who sees the axe embedded in the tree and thinks: “And I was just thinking I’ve gone further from the cabin that I should have.”

King Gong (AKA Mick We-All-Know-You’re-A-Serial-Killer) explains how the night will go. Three members of the audience get red cards. We don’t get any free minutes. They can vote us off any time. He SLAUGHTERS an Australian woman in the front row and a man in a suit called Tim. Both want to die but pretend it’s ok by laughing.

The acts are announced one by one. And it’s seconds before I start to watch the entire night through my fingers. And I’ve sat through A Serbian Film. It’s carnage. The audience smell blood early and the window of opportunity between a comic reaching the stage and getting through the first 30 seconds is getting shorter. No-one is bulletproof and there’s a guy in a wheelchair. And a midget.

A smiley youth bounds onstage with a guitar “Give me a word and I’ll improvise a song” he announces – at the Comedy Store – the home of Improvisation Giants, The Comedy Store Players. “FUCK OFF” shouts someone in the crowd. They are gaining power. Playing a game of what we can spot to kill you with. A fat guy starts a story about his friend. “DID YOU EAT HIM?” they shout. A large transgender Asian tries next. “WHAT THE FUCK ARE YOU?” comes the shout before they even speak. At one point, King Gong stops the show and orders one particularly destructive heckler to come up on stage. There is silence. “Easy to shout from the shadows isn’t it?” he jeers. I recognise one comic from my Comedy Virgins gig – the Romanian Mr Bean. He looked cute in Stockwell. He is roadkill here. Two guys and one girl get through: a long-haired chap whose material isn’t great but his delivery is too fast for them to get him, a guy who talks about dope and shoplifting and who is pretty bulletproof and a dead-pan Polish girl who the crowd try to annihilate instantly until she tells her first joke which is well-crafted and proper funny and they shutthef*ckup.

And I’m actually sitting there thinking “I can do this. I have good material, I know how to talk to a crowd, I’ve won a TROPHY for godssake. I am an AWARD-WINNING COMIC.” The interval comes and goes. The crowd are more drunk and blood is now pouring down the aisles. I’m in the wings with the shoplifter guy. We are both in shock. I can’t stop laughing. Because I am now hysterical. Then I’m up. At the mention of my name, the crowd goes nuts cheering. Like they have done for everyone. Then there’s a 2 second lull while they assess me as I step onto the stage. “FANCY SOME COCK?” shouts the in-the-shadows-heckler. I last 1 minute 24 seconds. Which in hindsight, is a f*cking miracle.

Things I’ve Learnt:
1. Don’t do King Gong at the Comedy Store. I’m doing a new material night with Sara Pascoe and she’s NEVER done it. “It’s not what this is about” she says. Sara Pascoe reminds me of absolutely NO-ONE in a horror film.

2. It’s time to learn some heckle put downs. Especially ones about cock.

There’s the Comedy Store… Infamous. Born above a Soho strip club, opened in 1979 by Dan Ward (the legend whom Michael McIntyre got physically attached to at his first gig there – read Life and Laughing) and Peter Rosengard who wanted to bring the US version to the UK. Home of 80’s alternative comedy, the Comedy Store Players – like the Buzz Club in Manchester, it is a rite of passage for every comic name you respect and adore. The Club moved to Piccadilly in 1993 and the names are papered and projected on every wall as a reminder of what you want to do and how high the bar is.

Some performance spaces are nicer than others – dunno why – actors talk about a place holding magic, superstition runs rife, we’re not allowed to say Macbeth and shit and Mark Rylance used to burn offerings backstage at the Globe to appease the Theatre Gods. Whatevs. I’ve done acting in most theatre spaces up and down the UK and some places are special-seeming, usually because they have chandeliers, red velvet and carved statues. Other places are black armpits that smell of stale beer and wee – they often have red velvet too but it’s gone black and slimy like an old Soho cinema seat. Going subterranean at the Comedy Store Piccadilly is like entering a red and black womb – it’s curved auditorium holds about 450 seats. I wanted to type ‘souls’ there instead of seats, which is quite ominous in a Titanic-y kind of way because it’s not really like a womb at all…

And then there’s King Gong. The Comedy Store is as central as London comedy gets. Spitting distance from Piccadilly. Tourists, over-sugared from M&M World, ripped off by West End theatre prices and too scared to go one more stop on the tube head there to be mean to people less fortunate than themselves. Londoners, bored of being mean to tourists go there because they’ve been culturally deprived since bear-baiting was outlawed. King Gong is yes, a gong night. 3 cards, 3 audience votes etc. Except it is not like the Blackout at Up the Creek in Greenwich, it’s like no other gong night. It is like Ancient Rome. Medieval England. And they burn comics. 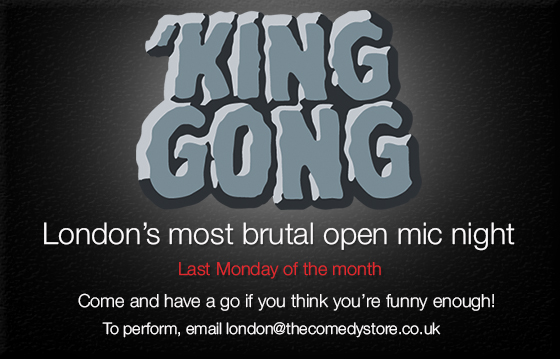