Gig 12. Where? Scratch That at the Ritzy, Brixton
Why? Turns out I know one of the organisers. He’s now emigrated. Rude.
Who held my hand? My blogger mate, Ian. He may secretly be writing a separate blog about the life of a +1.

What Happened? I got my first written audience reviews. Fortunately, they’re printable:

Of course, I might only be uploading the good ones, you don’t know. The 1,000 others might say “Scouse Shite” “Women aren’t Funny” “STONE HER” but my blogger mate Ian can testify that, out of the entire 30+ audience, 4 whole people bothered to write down what they thought of me and NONE of it was abusive. In this day and age when anonymous feedback and trolling is a National Pastime, THAT is nothing short of a miracle.

I’ve not encountered this on-the-spot review thing before – the audience given printed paper to write what they thought of each act which are given to the acts afterwards. Terrifying. Isn’t the instant reaction of the audience enough? But then, I’ve found myself laughing at so much bad comedy over the last few months out of fear, politeness, boredom, I’d have LOVED a private opportunity to scribble “Misogynist PRICK” “Stop saying Tinder” “PAY FOR A THERAPIST.”

I am so nervous waiting in the bar, I want to WEE FROM MY EYES. I post this statement on Facebook and get some sympathetic replies from friends who think I’m mentally ill. Everyone here looks like an act who is funnier and cooler than me. And they’re all clearly thinking: “It’s that mum from Crouch End. The one who killed the entire audience at Downstairs at the King’s Head by UNDERWHELMING THEM TO DEATH”.

Scratch That give you a voucher for a free drink. I get two. And drink both myself. Sorry Ian. I am completely uncomfortable in my own skin, jabbering inanely to Ian when he arrives, not knowing where to sit, to put my bags, put myself. 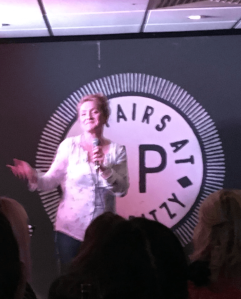 It’s still daylight when we start so the atmosphere is a bit community drop-in centre. I’m on 3rd but the 2nd act is a no-show so my name suddenly gets called and I’m fighting through a small crowded room to get onstage. It’s a 10min slot but I’m nervous and forget a middle section so end after about 8. I am popping the mic like a nob and have Dry Mouth AGAIN but concentrate on concealing nerves at ALL COST. So I’m quite chuffed by the outcome. YES I AM GOING TO TYPE THEM OUT AGAIN FOR MY PLEASURE:

*This is not a random note from a mentalist. I have material about Lollipop people on dating sites. It’s “HILARIOUS WORK”. 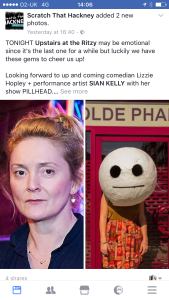 I read a stand-up tip somewhere online: “Confidence will come. Arrogance is no substitute.” I currently think I’m faking both. My mouth is so dry onstage, it’s like talking through sandpaper. It’s a mixed bag of acts. Some sketch shows going to Edinburgh. A one-woman thing about depression called Pill Face with a commendable Papier-mâché head. Even if the head gets filled with talc and pills which end up all over the stage. There’s a character act and I’m the only stand-up. However, unlike the last gig I did in Brixton, I don’t feel like a fish out of water. It’s a Scratch night – anything goes.

I think I did ok. A whole 2 people stop me in the break to say well done. Some of the acts say it too, albeit in the reluctant “I have to say something” way acts do when they mistakenly make eye contact and know you know they’re a fellow act. I run into 2 girls in the loo who say they’d pay proper money to see me perform. They’ve written one of the reviews. I want to embrace them but we’re in a toilet.

My blogger mate Ian and I discuss a Lollipop Men joke which has stopped getting laughs:

“Lots of trolley dollies on Uniform Dating, no pilots, I checked. But quite a few Lollipop men and women. And they’ve got actual pictures of them with their actual sticks. Now, even if you are into S&M, that’s a big stick. Good for a safe word though – STOP! No missing that, no excuses. Thing is, if lollipop people are your thing, where did you find that out then? Were you hanging round outside a school? In which case, big sign saying “Stop Children” is a very good idea.”

I think the last bit is “HILARIOUS WORK” (I refer you to my reviews) but I’ve tried it enough times now and it’s facing the cull. But I just can’t let it go. I want to know WHY my hilaaaarious joke is not working. They laugh at the “safe word” bit but not the “stop children”. Is it too paedophiley?? They’re confused about what the sign actually says? “STOP” or “STOP CHILDREN” – it can’t be both. Most people find discussing the ins and outs of a whether a joke is funny tantamount to relaying your dreams or the plot of a movie. Ian is not most people. Ian is a LEGEND. His blog is one of the most interesting and forensic popular culture review blogs IN EXISTENCE. There’s a link to it below but for now, EYES BACK ON ME. Ian says “Stop Children” is just one joke too many, I’ve peaked at “Safe word” and should quit while I’m ahead. He says he’s finding coming to these comedy things quite interesting – as maybe a social experiment would be. Me perhaps being the social experiment. I shall keep a close eye on his website. Incase he’s started blogging about a close friend weeing from her eyes.

Scratch That (formerly Hackney, now Brixton) is closing down which is a SHAME. All the organisers seem to be getting married at the same time, some of them in different countries (or at least that’s what they SAY). The Ritzy is a great building and the upstairs room was packed. I hope another night takes it’s place.

Link to My Blogger Mate Ian’s Blog: if you want to read the excellent workings of a forensic mind on subjects from Smiths Albums to How much of James Bond is set in the UK, click on this: IAN FARRINGTON, REVIEWING POPULAR CULTURE ONE THING AT A TIME. Seriously, his film reviews are up there with Pauline Kael and Harry Knowles. Read his blog, like it, share it, make him HUGE.