In which I play a legendary club that has its own tube sign, mistime my act by 2 whole minutes and meet face from the past – Manc legend, Paul Tonkinson. ** Footage below. Of me not him, don’t get excited. **

Why? They watched a clip and let me in.

Who Held My Hand? My mate Sue.

What Happened? I had this in my diary for MONTHS, coz of the waiting list. But, novice to stand-up and all-time ignoramus, didn’t know it was a big deal until I get an email with the line-up and a picture of a bald man off the telly. 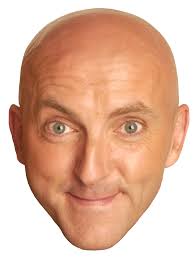 I remember Lee Hurst talking about back problems on TV but haven’t seen him in ages. He’s not here tonight but I’m excited about another familiar name…

Paul Tonkinson was a 3rd year at Manchester University when I was a snivelling fresher. He was our comedy GOD. We had a host of famous alumni, including Rik Mayall and Ade Edmundson. Tonkinson and a mate of his used to do physical slapstick inspired by Bottom but it was Tonkinson I remember most (sorry his mate).

A physical embodiment of Beaker from The Muppets, with an elastic face and killer timing, he was our very own Ade Edmondson and, whilst I utterly failed to pick up a career in stand-up which was there for the taking, he never stopped, supporting close colleague Michael McIntyre around the globe and remaining just as fresh and original.

The fact that I’m going to meet him after 27 years has made me slightly forget that I’ve got to also do 7 minutes of comedy at a big important club. Well for me it’s big. It seats about 70-80 and when the MC calls “Doors Open!” into the bar, instead of the usual “f*ck off we’re drinking” vibe that accompanies the lone bringer who drags their arse off the barstool, the ENTIRE club get up and follow him.

Paul T isn’t here yet and I panic. I’m billed in the middle of part 2 of 3. Headliners usually arrive just before their spot and leave right after. I want him to see my stuff and think I’M BRILLIANT.

Then for some reason, MC Dave Ward juggles the running order and I’m bumped to the 3rd section (with the top acts – feck). As I lost NO time in telling him my MASSIVE connection to Paul Tonkinson, Dave brings the poor guy over during the 2nd interval. Turning my back COMPLETELY on poor Sue and HUG HIM while he fights to remember a face he never noticed 20 years ago.

Isn’t it awful to meet your heroes and find they’ve changed and are shits? Phewie, Paul Tonkinson is JUST THE SAME, 27 years older but unmistakable and utterly LOVELY.

After a brief exchange about people in common and our massively different comedy journeys, he suggests we meet up and chat comedy. I am well aware this may change when he actually sees my act.

It’s a brief wait, drinking water and pretending it’s gin, as the night rattles on with momentum. A better mix than usual with a tall guy who makes the audience do farmyard noises and Jason Patterson who so far, is the strongest, slickest and genuinely funniest.

I’m on after a hairy builder. I spend his act deciding on the crucial wording of my first line. I’m excited and jittery. Better than bricking it. The audience is polite and quiet with odd pockets of energy made stronger by booze. They seem fair, giving great stuff a great response and mediocre stuff polite support.

The blinding lights bleach out most of the audience so I have to remember how far back the room goes to take everyone in. I deliver my first line to a table of designers:

“So you’ve all got proper jobs. Yeah, yeah… I’ve got a proper job. (Looking like I haven’t) This isn’t my job. You can’t call something a job if you don’t get paid. This is my voluntary work. This is my charity work. You’re welcome.”

This got laughs in Edinburgh. It’s met with unsure silence here. I’ve started quiet. But I want to take my time with this gig. Appear assured and not try too hard. The Backyard has a raised stage and the sound is great. The performer has all the status. I like that.

“So, let’s get political and talk about fetishes.”

Then, nearing the end, for some fecking reason, I launch into my Acronym Sex Code stuff. This is not part of tonight’s set. Brain screams at mouth “THIS IS 2 MINUTES LONG! ABORT! ABORT!” Too late, I’m in. I whizz through it, not fully explaining everything and don’t have the strongest ending but they stay with me. I’ve earned trustability at least.

Sue hands me my phone coz I made her record it all. “You were a bit over 9,” she winces. I’m already working my apology to Dave Ward when Paul Tonkinson grabs my arm on his way to the stage: “Well done. That was good.” I go bright red in the dark.

His set is brilliant. He’s so assured, his cartoon physicality still precise and unique. His impressions of his teenage son pacified by a mobile phone bring the house down. He passes again on the way off, saying: “I have to get going but let’s meet soon and have a chat.”

I’m having a chat with Paul Tonkinson. About comedy. Of course, he may be pacifying me on his way out of the country.

*** NEWSFLASH!! Jason Patterson will be headlining my new Comedy Club Night, GET BOOKED! on Nov 26th ***