Why? I want to do comedy to real Scousers, see if I get destroyed.

Who Held My Hand? My entire family.

What Happened? I was nervous. It went great. My parents got picked on by an 19 year old shite comic. And my mum DESTROYED him.

First gig in my home city = MASSIVELY CRUCIAL. A lot of my set mentions being an undercover Scouser. I need to know if real Scousers accept ANY of it as funny. Can I gig OOP NORTH and survive?? Laughter Locker is hosted by the best theatre in Liverpool (a theatre which has NEVER employed me, I hasten to friggin add). Admittedly, it’s in some basement anti-chamber that looks like a miniature conference room with nil atmosphere and an orange box for a stage. Still, the girls who run it, Cash & Kate seem lovely and there is a working mic. 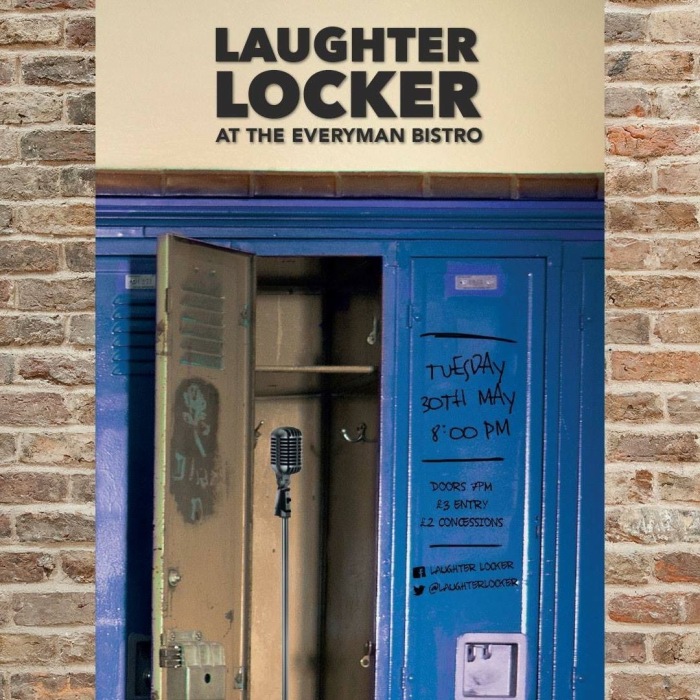 I arrive with my brother and his PA in his van. My brother has cerebral palsy and is a connoisseur of comedy and horror. His standards are very high. Still, if I don’t make him laugh, maybe I can horrify him. We meet my parents at the Everyman Bistro. We Scousers love a bistro. My parents are the loveliest parents ever. Way lovelier than yours so don’t even try. Although my mum believes she’s raised a masochistic child as this is the only reason she can see behind me wanting to do stand-up. She and my dad start on the alcohol early. So does my brother. So do I. I am so full of adrenaline, I am poisoned, high as a kite, like I’m on speed. Not that I’d know, officer.

I spot Sarah Roberts from the Rhyll Comedy Club. On a whim, I booked a gig there so I could claim I was an International Comedian. Then my husband told me Wales was part of Great Britain so this only made me a National Comedian. I’ll take that. Sarah is lovely, everyone here seems lovely. There’s no audience yet, apart from my family which is worrying but the Hopley are a biiiiiiig presence.

I suddenly remember I’m about to say the C word in front of my mum and dad. Still, even though my mum is a layyydeee, she was born in Toxteth, she once taught ex-offenders, she can cope. And my dad was a Naval Officer who’s worked all round the globe from Iraq to Aberdeen. I doubt he’ll even notice.

As ever, it’s a mixed night. There’s a stupendous turn from Shell Byron who’s on first. She plays a character called Ally Allerton who talks about mental health. Her connections with the audience is amazing. Afterwards she tells me she listened hard to my Scouse accent during the Scouse rant and, apart from one vowel sound, it was ok. I call that a result.

I enjoy my set, I get through it at least, even if it’s to a meagre crowd of about 20. Hey, my parents have sat in smaller audiences to see me do shit.

Then, towards the end, some 19 year old nob’ed comes on and ruins everything. He’s clearly angry with a lot of stuff, including the age of the audience. He spouts a lot of shit about not realising he was performing in a rest home. He thinks he’s Jim Jefferies. But you have to be as good as Jim Jefferies to do what he’s doing. You have to be funny at least. This guy is just angry with no material. He is openly admitting this and blaming not to care.

The audience hate him. You can cut the atmosphere with a knife. I feel a bit sorry for the guy, teenage hormones are tough, until he picks on my mum with his puerile ageist shite. Ahhhh feck. I led my dear beloved family into this unpredictable world of stand-up comedy. I am responsible for this. I am still green, a beginner. I have not experienced the hen do, the working man’s club, the fresher bar. Stand-up can be cruel. That’s why no one sits in the front row. And if they do, the comic should be scared. I sit there, considering at which point I should get up, cross the divide and punch the little tw*t. I can’t believe it’s going to come to this. Punching a teenager at my first Liverpool gig.

Luckily, my mum is not phased by anything. Later, as I’m spluttering my apologies, she confesses she was coiled like a spring incase he started on my brother and she’d have to step in and cut his throat. I love my mum. Fortunately for said twat, he didn’t. He probably knew if he did the disability thing with someone severely disabled in the room, someone would knife him. So instead he had a pop at the elderly.

Of course my brother is perfectly capable of defending himself. The last comic of the evening is nice enough but dull. I hear my brother typing away behind me (he types with his nose on a touch talker) and I turn round. He has typed out: “When are you going to say something funny?” He is admirably more insulted by mediocracy than teenage bile. Still, I panic and beg him not to press play. His speech aid sounds like Stephen Hawking but the UK Bond version. And the room is very quiet.

Then the guy continues to be shit. I turn round and beg my brother to press play. But he’s erased the message. By the time he types it out again, the guy has turned a bit of a corner and is being less shit. The moment has passed and I feel wretched. I stopped my brother doing what he totally should have done. Be the first man in history to heckle a comic with a speech aid. And I will never, ever forgive myself.

After the gig, the shit Jim Jefferies approaches my family to apologise. My mum burns his runty little ears with her response. He fumes at her, like all teenagers out-done by their mams – like I’ve done many times before this one – and stammers: “Yeah…well…I don’t give a f*ck” before running away to wank into a sock.

My first Scouse gig pretty much went as expected.

What I Have Learned: